Walking the Talk Around Gender Diversity 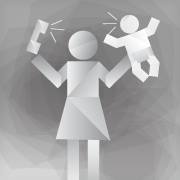 We started and now end our summer blog series with an anonymous guest post.

As someone who is recently unemployed, I have been networking in search of a new role. I work in the financial services industry and was employed just below the executive level. As I search for a new role, I’ve noticed a trend: Men, regardless of responsibilities, tend to have more senior titles while women, who may well have more responsibilities than the men, often have titles that, on paper, appear subordinate to their male peers.

I’ve been interviewing for a director-level role with a large U.S. financial services company. Though I’ve been a managing director most recently, I appreciate that organizational structures differ among companies, so I decided to pursue the role.

I have had nine – Nine! – interviews with this company. Only one of the interviewers was a female at the director level. In preparation for my interviews, I researched the employees’ backgrounds on LinkedIn. The female had a senior leadership level title – co-head – on her profile. How was it possible that she went from a co-head to director level?

I assumed that I was reading about the wrong person and would be interviewing with another woman at the company who shared the same name. That was not the case. It was the same woman and when I spoke with her, I asked about her LinkedIn profile. She shrugged and replied nonchalantly that the company had a reorganization and change in titles about a year ago.

On fairygodboss.com, I read some of the female employee reviews on the company and discovered very low reviews in the area of gender diversity. One of the comments put it bluntly: “It’s an old boys’ club.”

I was giving an update on my job search to a female networking group and mentioned this company and my disappointing findings. One of the other members said, “Well, what do you expect? It’s financial services.”

I was curious as to the “rationales” behind this reality. “It’s just the corporate culture and the old boys’ club mentality” isn’t enough of an explanation for me. Do men do a better job of selling themselves to win and attain the higher-level positions? Do men have better networking contacts? Is it just assumed that women will take more junior roles and leave it up to the men to lead? Is the subconscious bias of male managers hiring employees like themselves? The answers may be “Yes” to all questions.

Does that mean women should allow this trend to continue?

I believe that we all want to work in a corporate culture that is a meritocracy, one that does not discriminate against gender or race. Many women are working full time and bear the majority of parenting and household responsibilities, which often results in stress and fatigue. Some women may need to prioritize networking and allocate more time in their day to speak with former colleagues and make new contacts. A change in routine may require a change in habits that will require spouses or partners to share in more parenting and household responsibilities.

Women also need more support from other women. I have worked in several corporate cultures where the senior leaders were predominately male. The few female leaders did very little to coach, encourage. and promote other women in the company. It was as if these female leaders had climbed the ladder and made it to the top and then didn’t want to rock the boat or have any other female push them off their pedestals.

We need female leaders to not only coach other females but also speak up for their promotability in a business and push for new female hires. It’s too simple for male leaders to hire males like themselves. Companies need to have intention and establish diversity goals, and then monitor hiring practices to ensure those goals are met.

I am happy, however, to be able to end this post on a high note: I recently had a positive networking experience with a senior female leader who was humble and kind. We spoke for about an hour and toward the end of our conversation, she asked “Would you be open to a role on my team?” I was dumbfounded — and so happy! This female financial services executive was paying it forward, looking to hire a female for her team. She was giving me a chance and walking the talk around gender diversity.

We need more behavior like this from other female leaders. As women, we may also need to say no if offered lower-level roles and titles that are not commensurate with our experience. If enough of us say no, companies will have to begin recognizing female talent and assigning roles and titles based on merit. The U.S. has never been more focused on the need for diversity at all levels. Women must embrace the moment and stand up for ourselves and one another to be recognized for our accomplishments and talents.