Why Didn’t I Get That Job?

Have you ever watched someone start a really terrific job and feel that you were overlooked for the opportunity? Have you ever brainstormed ideas about how a company could grow—perhaps in an undiscovered direction—and in your mind developed a roadmap of how that company would get there? Sometimes the best way to land a job or get promoted, is to create an entirely new opportunity for yourself—one that will benefit your employer and that will feed your soul.

Make Your Own Opportunity

To give you some inspiration about generating your own creative career path, I’ll give you three scenarios from my own experience. None of these jobs were advertised positions that companies were looking to fill—they were undiscovered growth opportunities, or areas of pain, that I identified and for which I offered a solution. That old saying about being in the right place at the right time is true. But you have to have the courage to ask the bold question: “Is your company ready for change and would you like to hear my idea?”

In high school, I cleaned homes to make extra cash. Looking ahead to college, I knew I’d need spending money, so after brainstorming with my entrepreneurial parents, I decided to target faculty for potential housecleaning work. I crafted a letter explaining my background and how I would be attending their college in the fall and was looking for a family who needed someone to keep their home tidy and spotless. Next, starting with letter “A” in the directory of professors, I sent off 20 letters offering my services. I landed a house-cleaning job from that first batch of letters.

Circa 2002, while working as a recruiter for a high-tech manufacturer, I felt the growing pull to be part of a socially conscious company. I proposed a dual role for myself: Community Relations/Recruiting Manager, in which I would create a program that tied in support for a math/science education program. I believed that helping young people train in the high-tech field would also funnel the brightest graduates into the company’s future recruiting efforts. I pitched this role to my manager. It took an executive-level change and several years of insisting that investment in education was the right direction for the company, but eventually I was awarded the role. This position allowed me to try out a career in corporate philanthropy without having to give up my recruiting career.

After my high-tech company was acquired by another corporation and my dual role was eliminated, I perceived a world of opportunity before me. I already had a long-standing relationship with the owners of a local temporary-placement agency, so I decided to pitch them on adding a professional- and executive-level business unit to their services. I began on a part-time, contract basis. By the end of the summer, the role turned into a full-time career move that lasted for the next five years.

Many of us have dreams of something bigger, but we’re trapped by our belief that conventional society has a prescribed path that must be followed. In my work as a job-search coach at greyzone, I invite you to dream big, leverage your network, and imagine what your job could look like if you could design a new role or career.

If you’d like to explore this topic more, then I invite you to schedule a complimentary call to discuss how I can be a career mentor for you. Or sign up for my newsletter for periodic tips. 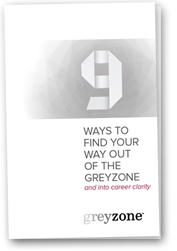 Get the Free Guide: “9 Ways to Find Your Way Out of the Greyzone”

Get career clarity with nine proven ideas to get out of the greyzone. If you are stuck or confused about your career, this guide could very well get you back on track!